The Laboratory for the Neural Mechanisms of Attention is dedicated to understanding how the human brain selects and processes relevant information during focused attention, and how these mechanisms break down with brain damage and disease; in the sections below we provide a review of the historic and current research themes of the lab. In general, we use a cognitive neuroscience approach that combines psychophysical and behavioral measures of perception and attention with neuroscience methods for measuring brain activity, including multimodal imaging in humans, collaborative studies of brain systems in animal models, and translational studies of disorders of attention in patients. Through 2023, a main focus of the research program will be simultaneous EEG-fMRI studies of attentional control and selection in vision using machine learning methods, connectivity analyses and advanced signal processing approaches together with our engineering colleagues at the University of Florida; this work is supported by a grant from NIMH

ELECTROPHYSIOLOGY OF ATTENTION AND PERCEPTION 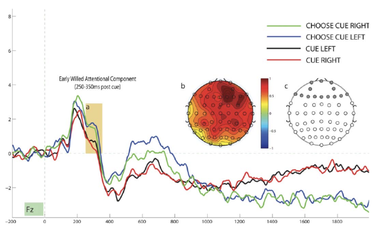 Since the 1980s, we have used electrophysiology to investigate how attention influences sensory analysis of visual signals, and where during information processing such influences take place. We began this work in the midst of a thirty year controversy in the cognitive literature about whether focused attention affects information processing relatively early (during sensory/perceptual processing) or only later when high-level (categorical/semantic) encoding of stimulus inputs was achieved (the early vs. late selection debate). Prior neuroscience studies had attempted to address this question using electrophysiological methods such as event-related potentials (ERP), but had done so in narrow paradigms that were difficult to relate to the vast cognitive literature of the day. We combined the cognitive psychology methods used in behavioral studies (expectancy based cuing of target location) directly with EEG/ERP methods to provide a first strong test of the hypothesis that cued spatial attention would influence sensory stimulus processing. In a series of studies with colleague Steven Hillyard at UCSD, we were able to demonstrate that when a human observer develops an expectancy that a target will appear at a particular location, stimuli presented to that location received enhanced sensory processing beginning as early as 70 ms after stimulus onset. Importantly, we demonstrated that expectancy based spatial attention did not act only by modulating response processes, but included specific alterations in sensory processing. This series of studies helped to turn the corner in the early versus late attentional selection debate, and provided incontrovertible evidence in favor of the idea that voluntary attentional processes influence stimulus processing early in the human information processing system. With German colleague Hans-Jochen Heinze, we later related these physiological signals directly to signal detection measures by showing that signal detection parameters of perceptual sensitivity (d’) were closely associated with changes in sensory processing measured electrophysiologically, and critically, that such physiological effects were not related to measures of response bias (Beta). Later, the group went on to demonstrate that reflexive (stimulus driven) attention also influenced early visual processing, work published with former student Joseph Hopfinger who is now a professor at UNC-Chapel Hill. The dominant thinking at the time was that the facilitation in response speed observed in cognitive studies resulted from biases in motor processes, but our studies using ERPs in humans demonstrated that early visual sensory processing was transiently enhanced when a salient event reflexively captures one’s attention. Our ongoing research aims to understand how attention influences visual processing across a wide array of perceptual tasks from spatial attention to high level object processing.

MULTIMODAL IMAGING OF ATTENTION AND PERCEPTION 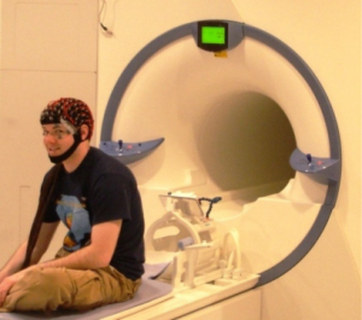 ERPs provide a powerful tool for working in humans to investigate the time course of sensory, cognitive and motor processing, but leave open the question of precisely where in the visual hierarchy the effects of attention on perception are manifest. To tackle this issue, in the early 1990’s, we initiated another line of work that helped launch the field of multimodal imaging. We used functional brain imaging (initially with PET and later fMRI) to show that during spatial attention, early stages of visual cortex were modulated by attention. Why this work was so salient was that we combined electrophysiological measures with functional brain imaging in studies of human cognition to identify the time course (from electrophysiology) and the anatomical loci (from brain imaging) of the effects of spatial attention on visual sensory processing. This work sparked a flurry of investigation around the world, and helped launch multimodal imaging to investigate human cognition, now strongly characterizing cognitive neuroscience. In ongoing work we aim to refine methods for the analysis of simultaneous EEG-fMRI data using machine learning and graph theoretic methods (see next section). 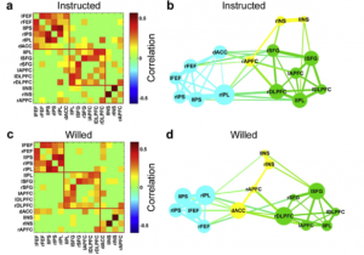 In the mid-to-late 1990’s, the lab began to investigate how the human brain was able to control the focus attention, which results in the sensory levels effects described in the prior section. That is, if focused attention is like a spotlight, what mechanisms direct the spotlight? Numerous prior studies, primarily from human neurological patient observations and studies, but also neuroimaging and studies in animals had suggested that regions of the frontal and parietal cortex are involved in the voluntary control of attention. However, little direct evidence existed to show that frontal parietal brain systems were involved in initiating focused attention. In our 2000 paper (Hopfinger, Buonocore and Mangun, 2000), we provided new evidence (published side by side with Maurizio Corbetta’s paper on similar mechanisms) that isolated the frontal parietal network for voluntary attentional control. Our work, also included evidence that frontal parietal activity was dissociated from changes in visual sensory processing, and importantly, that it preceded it in time, as models of attentional control proposed. We employed the method of event-related functional magnetic resonance imaging in that influential paper, but importantly, we combined the method with a well-understood cognitive paradigm (the same as used in our earlier ERP studies of sensory processing and attention – a variant of the Posner spatial cuing paradigm). This enabled us to isolate attentional control (induced by the cue) from selective sensory processing of subsequent target stimuli.
In several studies with former postdoc Barry Giesbrecht, now a professor at UCSB, we followed up this work to show that the frontal parietal network (sometimes called the dorsal attention network) contained specializations for spatial versus non-spatial (color or motion) attentional control (Giesbrecht et al., 2003). In other work, with colleague Professor Joy Geng, we identified specializations of dorsal frontal cortex (in and around the FEF) and the posterior parietal cortex (in the anterior intraparietal sulcus) during top-down and bottom-up attention. Although as previously shown, both frontal and parietal regions were active during selective attention, the dorsal frontal cortex was sensitive to the direction of attention but not stimulus salience, while the parietal cortex showed the inverse pattern, being sensitive to salience, but not to the direction of attention (Geng and Mangun, 2009). More recently we used simultaneous recording of EEG and fMRI BOLD signals, and single trial analyses of the EEG to guide the analyses of the BOLD signals, with my postdocs Yuelu Liu and Jesse Bengson, and collaborator Professor Mingzhou Ding (Univ. of Florida), we were able to show that lateralized changes in EEG alpha power with spatial attention were coupled to activity in the posterior parietal cortex but not the dorsal frontal cortex during attentional control (Liu et al., 2016). This finding will require a rethinking of the relationships between nodes in the dorsal attention network and patterns of attention-related processing in visual cortex. Lastly, using graph theoretic methods, we are investigating the way that networks for attentional control can realign their functional structure as attentional control demands change (Liu et al., 2017).

CELLULAR AND NETWORK
​MECHANISMS IN PERCEPTION AND ATTENTION 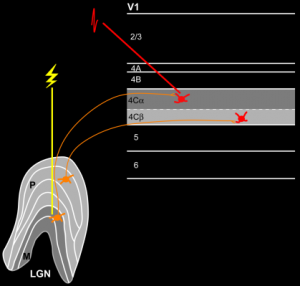 We also conduct collaborative work with Marty Usrey working at the cellular and small network levels to investigate perception and attention mechanisms. Using cellular recordings and a novel stimulation and recording technology, we were able to show that spatial attention enhances synaptic efficacy and signal-to-noise ratios in geniculo-striate processing. This work was published in 2013, with our then jointly supervised postdoc Farran Briggs who is now an Associate Professor at the University of Rochester. We discovered cellular and circuit mechanisms of attention that were not previously described, and that will help us understand a key aspect of the role of attention in perception, as well as how disorders of attention may result from deficits in local circuits for attentional selection. With former doctoral student, Andre Bastos, now a postdoc at MIT with Earl Miller, we investigated geniculo-striate interactions by recording oscillatory neuronal activity in dual recordings. In this work we showed that gamma band oscillations in neuronal activity was generated in cortex, rather than in the subcortical visual pathways. Going forward, this research will continue to focus on cellular and circuit level effects of attention, incorporating additional tools for manipulating cortical circuits during attentive behavior, including optogenetics, and expanding the research program to includes functional brain imaging together with optogenetic manipulation and cellular recording. 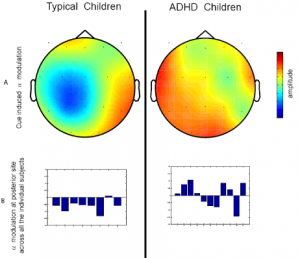 Having contributed to our understanding of attentional selection and control mechanisms, we have moved to translate this knowledge to understanding disorders of attention. We have contributed to understanding how attention mechanisms may be deficient in attention deficit hyperactivity disorder (ADHD). With former postdoc Ali Mazaheri, now an Associate Professor at the University of Birmingham (UK), and in close collaboration with our clinical colleagues at UC Davis, the lab has used EEG/methods to investigated attentional control over sensory processing in children with ADHD. In two studies we showed deficits in posterior alpha suppression during attentional control (i.e., in response to an attention cue). Importantly, we discovered a functional disconnection between anterior brain regions and posterior brain regions during voluntary attention. We used trial-by-trial analyses of the EEG, and measures of cross-frequency coherence to show that posterior alpha and anterior theta were anticorrelated in typically developing children, in line with the idea that the frontal-parietal attentional control network was modulating posterior sensory cortex (as described above). However, this interaction of frontal and posterior EEG rhythms was absent in the ADHD children, even though their performance in the task showed they were utilizing the cue information to enhance performance (Mazaheri et al., 2010, 2103). This research helped to bolster hypotheses in the literature that disordered attentional control over perceptual processes might contribute to ADHD. More recently, as part of an NIMH-supported research project we investigated the role of attention and cognitive control difficulties in patients with schizophrenia (Boudewyn et al., 2017).